This is a guide designed to help admins more easily deal with all varieties of problem members. It's a touch simplistic because there isn't enough space to cover every possible instance/outcome. But it should help regardless.

So you have a problem member... Inevitably all admins will encounter problem members. It's part of the duties of an admin to deal with them. You set the rules of your community, best be prepared to enforce them afterall. But all too often in the roleplay world it gets complicated and extraneous things get thrown into the mix. S let's boil it down to basics...

Here is how you deal with a problem member: 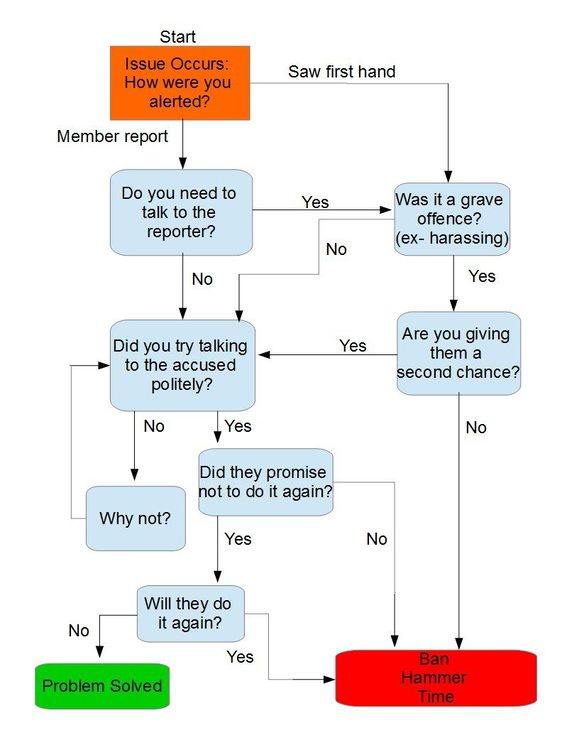 In case the image doesn't load...

After the issue occurs how did it come to your attention?

Were you notified by a member? If so then do you need to speak to that member for more info? (Members will report issues but in the heat of the moment they either forget critical details or just omit things they don't think are important. Or do you need more evidence? Remember that an unfortunate truth to adminning is that members lie. So always be ready to ask for proof. And keep copies of whatever proof you do have for later on. You might need it.)

If you saw the issue yourself, was it something pretty grave? (Something you need to act on right this second.) If so, are you going to give them a second chance or is it severe enough that they're done instantly? (For example if they're harassing another member in the chatbox and asking for personal info despite being told to stop...) But if they are getting a second chance then it's time to talk to them.

Talking to the accused is the most critical phase. Unless they've done something so egregious that anyone with an iota of common sense could plainly see they were out of line and needed to go (ex- posting loads of dick pics in the non-mature chat sections). Then it's time to actually speak to them and let them know what they did was not acceptable. It doesn't have to be as cold/clinical as "you screwed up, don't do that again". You can, and likely should, show more compassion than that. But at the same time don't fall for sob stories or excuses.

A member claiming their <mental illness> is why they're acting up is very likely lying. People with mental issues try very hard to keep them under control so as not to contribute to that kind of stigma. Similarly if they claim to be hated by all or that everyone is picking on them... the common denominator is them. (There's a saying: "If you meet an asshole, it's them. But if everyone you meet is an asshole then it's you.")

If they agree to behave then hold them to it. If they go right back to causing the problem and doing exactly what they were just warned for then it's clear they haven't listened/learned and won't. So you either have to ban them or put up with the misbehaviour. Though a word of caution on allowing bad behaviour. Members will see admins letting bad behaviour slide. There's only so many times they'll put up with it before they decide it's not worth staying if the problem member is allowed to roam free. Don't sacrifice good members for a problem one. Even a very active problem member will kill your site if left unchecked. Truth is that problem member needs your site far more than your site needs them. (Problem members tend to get kicked out from quite a few sites. They will often clamp onto ones that don't immediately put an end to their issues.)

At the end of the day, this guide is just a tool. You still have to use your best judgement. Situations may be slightly different between members but it'll almost never be so different that nothing in the guide will apply. (About the only way would be if the problem member is the root admin... in which case there is nothing that can be done anyway. And it's a whole other situation to begin with.)