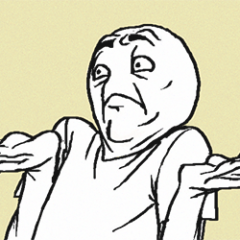 A guide of questions and things to consider when attempting to determine whether or not your character is one-dimensional.

It plagues the mind of a roleplayer. It's a common insecurity that many of us hold. Our fears and insecurities wiggle their way into how we manifest ourselves in these imagined worlds, and we're forced to face them on a regular basis. Is my character... one-dimensional?

Is Harry Potter one-dimensional? How about Aragorn? The Wicked Witch? How about that one really cool orcish character from that tabletop session six years ago? Some will say yes. Some will say no. How do you figure it out?

When considering your character’s potential lack of complexity and nuance, you may be better suited by answering the questions below. Further explanation is provided in the spoiler tags!

1. When reading their history, is every event a moment of triumph or catastrophe?

A character’s history is important. Applications can present this in different ways: timelines, sectioned biographies, freeform history, and a few other formats. Writing a good history can be complicated at even the best of times because you need to include all the pertinent information without inundating the reader. Sure, you can write 15,000 words about their past… but should you?

This leads to a common mistake where you condense their history to a series of highlights… and you write them as highlights too. The reader, when reading this character’s history, will now be dazzled with a story that shows your character being triumphant over insurmountable odds or facing some soul-robbing catastrophe.

But why is this character so special and unique? Why is everything in their past so… important? By describing your character through once-in-a-lifetime triumphs or disasters, you give readers a first impression that shouts “my character is very special”.

That by itself isn’t one-dimensional. Maybe the character truly has lead a life of constant triumph or devastation. However, when combined with other factors, it can be damning. A life of immense triumph or devastation is very singular in its scope; there is little nuance to be found in a momentous act. Sometimes it's okay if not every moment in a character's past is a gripping tale of inconceivable odds. What's more is that variety in intensity demonstrates a clear grip on believable character development and variability in writing. Being able to discern between the mundane and the spectacular is essential to weighting your character's thoughts, feelings, and actions.

2. Are their interactions with others rigid and unyielding?

In other words, are your characters portrayed as living, breathing, emotional beings or as soulless automatons? A character might be feeling a whirlwind of emotions but this is meaningless if it isn’t displayed in some manner to the people you are writing with. Roleplaying is a collaborative activity. You might know your character is feeling a certain way but other people don’t. Show your work.

This can be used as a personality device (someone with stunted emotions or excessive stoicism), but even then their emotions are displayed in different ways if it isn’t done so verbally (a fidget, a darkening of the eyes, a difference in their gait, etc). An internal struggle to keep their composure is also valid but much more difficult to pull off.

Characters need to be dynamic in how they respond to others. Use their voice or their body to make their feelings visible to other characters and their writers. Otherwise, be prepared to have plots that continuously stall or are dead on arrival.

3. Are their weaknesses more than footnotes unceremoniously added as an afterthought?

Everybody has flaws. Scratch that, everyone has severely compromising flaws. Much like how in a job interview you’ll be asked to describe your greatest weakness, in an application or character biography it would be wise to incorporate something that describes your character’s key weaknesses. This can range from the physical to the mental, and both are important depending on the site’s structure.

Many people will cop out of this responsibility by making their weaknesses superficial. Maybe they get teary-eyed when in a confrontation. Is that really a weakness, or at least one worthy of being considered a major vulnerability?

People who write one-dimensional characters often slip up when incorporating quirks and weaknesses into their writing. If you have a superhero that’s weak to the cold, you probably shouldn’t be writing all those skinny-dipping-in-the-arctic posts. If you have a character that cries when angry, you probably shouldn’t be writing them as being an intimidating, take-life-by-the-horns individual when push comes to shove.

One-dimensionality regularly turns into inconsistent writing or blatant lying about what your character actually is. Weaknesses are often instrumental to how a character behaves themselves. We avoid what hurts us, or at least approach it differently as a result of our vulnerability. A one-dimensional character doesn't take these things into account and usually acts as though their weaknesses simply do not exist.

4. Does their personality clash with your writing style?

The kind of character you write is important. Diversity is a good trait to have in your set of characters. It challenges you as a writer, it keeps interactions fresh, and it maximizes your options when it comes to roleplaying with other people. If you are okay with writing one character and one character only, then that’s fine! But if you have more, it’s often wise to write something different.

So maybe you do that. You create a character that's completely different than the one you're already writing. Does your writing match this new personality?

If you write in one style and one style only, this then restricts your character’s ability to express themselves. You could make a character that’s eccentric or a character that’s aggressive but if your natural and only style of writing is the “reserved, introspective” kind these distinct personalities will be blunted or otherwise invisible. You won’t be capable of expressing their individuality properly. All of your characters will take on a similar tone and thus be expressed in an identical manner.

There are also pitfalls as a writer that may contribute to how others perceive a character. Perhaps on paper your character is varied and has a boatload of nuance. This doesn’t matter if you make certain mistakes. Your character, in practice, will be interpreted differently than how you intend.

Someone who is a lowly grunt in a decrepit business cannot be all-knowing about sensitive secrets (metagaming). Someone who has failure as a dominant personality trait cannot be momentously victorious all the time (god mode). Someone with questionable morals cannot make the right, ethical decision time and time again in a way that ensures everything goes ‘just right’ for those involved (higher self).

Indeed, a one-dimensional character can sometimes be a writing style problem instead of a character problem. Self-awareness and being cognizant of your weaknesses can go a long way towards ensuring that your contributions to this collaboration of writers is stellar and a treat to digest.

Did you learn something about your characters and how you present them to your fellow writers? Do you think something is missing from this guide? Feel free to let me know!