Gather round my friends for a tail of woe! A tail that will frighten the very fur from your hides for it reminds us all of the sacred, nay, profane! road that carries cats between life and death.

Imagine if you will a young kitten. She is a brave thing, with her white fur divided like continents by masses of brown and tan. She is a kitten with eyes that sit quite close to her nose, giving her a decidedly cross eyed appearance. This kitten, she knows that the drive yard, the trees, the up right and fallen down clothes lines are all part of her domain. She knows that the large cars that drive upon the hard path may be monstrous things that roar and snore; but they will wait for her to make her way off of the hard path and onto the place of grass. For she is indeed, the queen of this domain.

Until one fateful morning! The monster did not stop! It slew her in one fateful acceleration! And though the driver did get out and cuss, she could not be saved.

You would think this tale could get no darker. You would be wrong.

That very night I did witness the signs of dark magicks. I walked down that hard path and saw that the exterior light globe did shine directly upon the fallen queen’s bed. I saw that numerous outdoor chairs were gathered ‘round the bed, hinting of the ritual that surely took place.

For the very next day, I met the God Cat. He is a cat of stout legs and nose and ears battered from many wars. He too, is confident in his domain, merely waving his behind at me as I left the now unholy domain. He rubbed his head upon the monster wheel, as if to spit upon it.

Mere days later, another cat, very much like the queen. An adolescent, less confident but he walked with the wide eyes and up-pricked ears of a scout mapping his surrounds. He vanished a day later, I did hear one of the driver’s call his name, Joe! Joe! Joe! Perhaps, he had gone to get his sister….

For today! I saw three cats gathered upon the hard path! The God Cat! Joe! And another, perhaps the queen. I fear to get too close…. 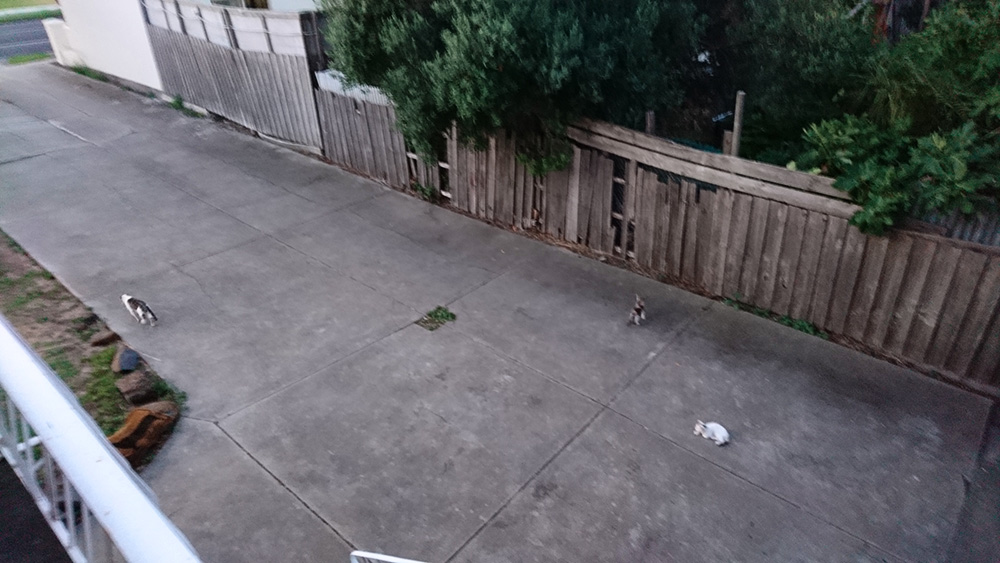