Like I always do, I decided to take a serious break this weekend and not code anything, and of course, like four hours into my break, I'm coding again. Rofl.

One time, I actually managed to code for about six months straight, pretty much. I'd wake up, eat something (maybe, if I was feeling kind to myself), and then get on the computer and start typing code, day in and day out. For months. I forgot Christmas existed because of that time-span, it was crazy. But apparently brain does and doesn't want to do it again, because on the one hand, I really want to go code shit, but on the other hand, I would much rather go back to sleep. You know how much sleep I got today? Like, 11 hours. That's ridiculous. I'm still exhausted, you guys.

So anyway, time to ramble about code! I helped someone install the character mod for SMF 2.0, and discovered something in it is not compatible with PHP 7+, and I don't know what. Mahahaha. That's so grand! Now, of course, with Character Manager version 1.0.1, I'm rewriting it from scratch (a-friggin-gain), on PHP 7.1, to make it compatible with PHP 7+, and also this version is first being written on SMF 2.1, and then when it's done, being back-ported. Several new features are shipping with 1.0.1, there'll be a built-in journal system, character status streams, and the shipper handler I promised is happening in 1.0.1 too. This will be the last fully free version of the char manager. Beyond 1.0.1, it will be missing certain functions, bundled with the Battle Suite, because I have to bridge the char manager and the Battle Suite anyway, so I'm just putting them together as the SMF RPG Suite. I will be packaging the last functioning version of the Battle Suite (4.0) and public-releasing it, but that version and char manager 1.0.1 will not be updated further.

ABS 4 and ACM 1.0.1 will also be the last versions of both that guaranteed support SMF 2.0 -- but they cannot be used together, as Battle Suite 4 does not have the functionality to bridge with the Char Manager. So you either use the Char Manager, or the Battle Suite + SubAccounts.

For ACM 1.0.1, I'm redoing how character profiles/creation is handled. The character creation and edit screen is now set up to be tabbed. Where you place image upload custom fields also won't matter, because all image uploads will go into the Images tab. Biography fields are set up to be separated into tabs and sections, very similar to how Nova handles it, same with the character grouping system -- ACM 1.0.1 brings back departments and ranks, though departments are child-alliances and ranks are standalone, again, use one, two, or all three, only alliance is required, and even that's technically optional. I'm actually super stoked about how the character biographies and the character list are handled. 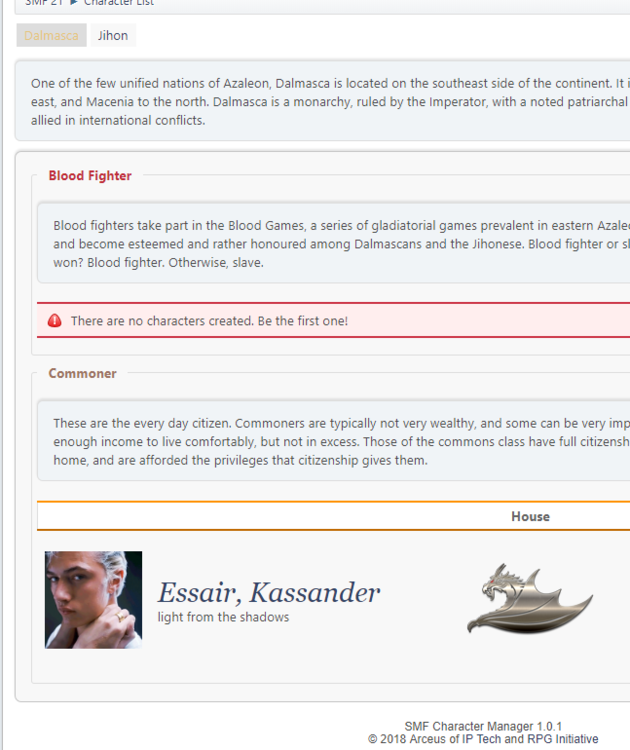 Names are also separated into three, one field per name (first, middle, last). All three can technically be left blank, but they won't display right. Haha. Admins can decide if they want names ordered First Last, Last First, or Last, First, anywhere the name is shown, thanks to this separation. 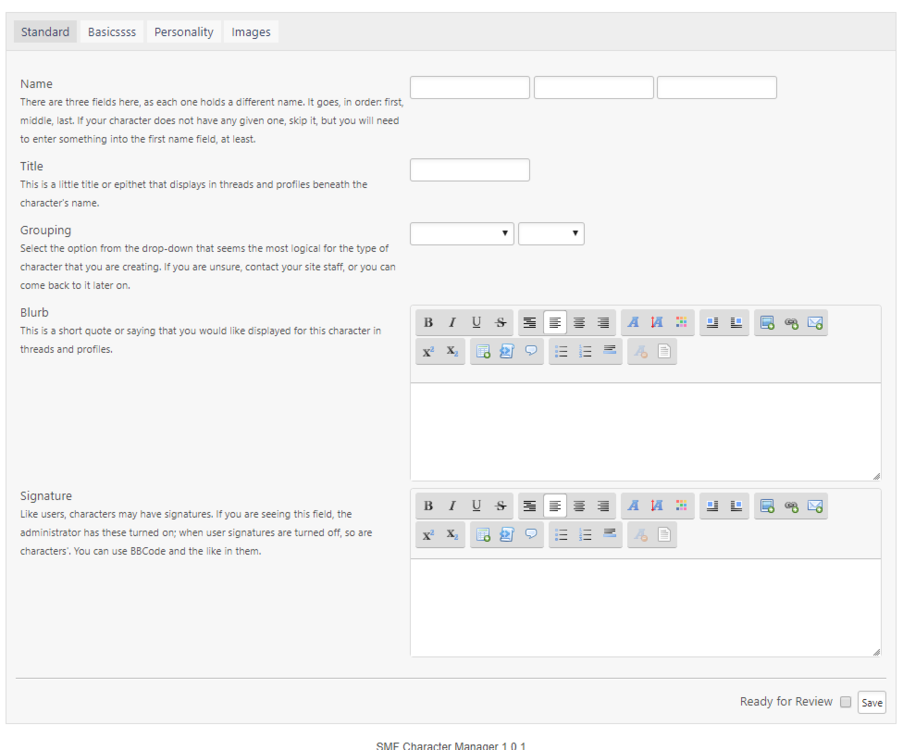 Basically everything in ACM 1.0.1 is built differently than how it is in 1.0.0, so there should be an upgrader script that I can write, which will convert the database information from 1.0.0 to 1.0.1. No promises on that, but the structure is very different in 1.0.1, so it should be able to run alongside 1.0.0's database tables (you'll have to uninstall 1.0.0 anyway, just leave the database information in-tact, install 1.0.1, and then run the upgrader). The converter from SubAccounts to ACM will still be packaged in 1.0.1, and also still be hidden. Honestly, if you still haven't made the switch from SubAccounts to the Char Manager, I'd wait for 1.0.1. It is much better, just, trust me. Rofl.

Borne of a flat-file series of random number generators, that were designed to "spawn" random Pokemon, the Battle Suite became the answer to table-top style systems on play-by-post games. Everything in the Battle Suite can be renamed and customised to one's liking, and it can be adjusted to suit everything from Pokemon to Bleach to Dungeons and Dragons to modern fantasy and beyond. Listen, this shit is off the hook kinda cool. It handles skills, skill levels (use a skill, it will decide whether it succeeded or failed, roll for secondary effect if there is any, calculate points awarded and award them accordingly, AND it has a controller that can be turned on or off for child skills, which can be set to sporadically award some of their points to their parent on a % chance), STAB and STHB (same-type attack/healing bonus, when using a skill of the same type the user is, it will multiply the damage or healing amount by a set number, yes this is customisable too), abilities, creatures and creature skills and abilities (it will restrict users to adding creatures that are in the spawner/bestiary, so you don't get people randomly taming unicorns when there are no unicorns in your universe), a random encounter spawner (spawns skills and abilities, too, and gives you a copy-pasta BBCode to pop into threads, majijijijik), bestiary (full listing of all creatures in the spawner; you can add information to the entry table and set the table and main content area up however you like, it'S ACTUALLY REALLY FRIGGIN BOSS). It also has drop-down selectors that will load a selected user's skills and or abilities in a thread and allow easy finding of which skill a player wants to use, no fancy coding required, you can roll a skill as an NPC's skill and also roll its damage/healing output lower than it actually is.

ABS 3.5 also had a quest system, the quest system, faction system, shop/item system (use items in threads easy peasy lemon squeezy, also features user selling, trading, and you can sell and trade creatures, shop system also sends out alerts for: someone bought your thing, someone accepted your purchase offer, someone is now selling an item that matches an item you want, etc), and reputation system (reputation alters rolls based on IC actions and how they fall on the morality scale, or which faction becomes happiest with them because of these actions), will come in ABS 5 which will ship with the RPG Suite.

(If I seem really proud of the Battle Suite, I am; blame the Battle Suite for making me the coder I am today, and consider it my magnum opus. The char manager is nothing compared to the Battle Suite. Nothing. It took me several years and five major versions to get the Suite as good as it is now.)

Following the releases of ACM 1.0.1 and ABS 4.0, that will conclude my work on SMF 2.0. I may later release the mature content mod, and perhaps the topic description mod (thread dating will be packaged with ACM 1.0.1 by the way, goes hand-in-hand with the journal system), but I will not be making any new mods on SMF 2.0. From there on out, I'll be working exclusively with SMF 2.1. (Yes, I'll still make 2.0 themes, I guess, if I must P=) I'm just done with SMF 2.0, and tbh, with 2.1 around the corner (I'm fairly sure they're seriously considering releasing SMF 2.1 Beta 4 as RC1, so it may be another year, before they do, but this may well be it guys, finally), 2.0 is getting a hair done-to-death, and it's time to move on.

After I get my queue of things-to-do pared down, I'll be working on releasing some free and not-so-free themes for use on SMF 2.0 and 2.1 Beta 3. The free ones will not be very fancy; just putting that out there now. They will, however, come in a range of colour schemes, and probably have jQuery and bootstrap support by default, and also be mobile-responsive out of the box. The not-so-free ones will have templates altered according to their pricing tier (ergo, the $10 ones will have a custom board index). Some of my older themes have really cool elements that no one is using and it's a damn travesty, so a few of the premium themes will be super cool.

In the interim, though, idk what the frick my sleep schedule is doing (okay, no, I have an idea of what it's doing), but I'm tired all the time. Scuse me while I die for the rest of the weekend. (I AM SO SORRY EVERYONE WAITING ON THEMES, I LOVE YOU, SORRY.)