I finally broke the two-week or so streak of every piece of code I was writing during that time-frame working immediately, and caused a few errors today. Rofl. Mostly I've been bouncing back and forth between working on the Character Manager, and working on the theme orders I've got sitting in queue staring me down, but I keep taking minor breaks to go do RP posts. It seems kind of Wild that I'd be doing all this work for RP boards and then not RP? Like, I guess some people do, but it just seems weird to me, so I try not to get caught up doing something and forget what the heck-all I'm even doing it for. (This is why I can't quit RP, you guys - okay no there's another reason but, spoilers.)

I've gotten pretty far along in the next release of the character manager, though! I'm SUPER excited for this, y'all, it's gonna ROCK. CM 1.0.1 may actually be released specifically for 2.1, 2.0 functionality not promised, I'm not sure. Mostly I'm focusing on doing it before I figure out how I'm handling releases. Just thinking about what's easiest here, because tbfh I have no idea. Lol. But there are some things it does on SMF 2.1 that it just cannot do on 2.0 (I'll show you in a second!), and the default templates would need to be tweaked to work with Curve (Curve is SO DUMB, Curve2 is much better, much more intuitive to work with). I'm probably a little over halfway done with 1.0.1, so that's exciting. (Honestly, I can't wait til I'm done, seriously, I can't, I'm so sick of coding right now.)

The breaking the everything-working pattern is actually really nice, like you'd think I'd be happy about not breaking anything? But it's like, when things go smoothly and nothing errors out on me, I just kind of sit here, and stare at my screen. And wonder what unholy hell is going to go wrong eventually, because things only go so right when chaos is ahead. Does this make me jaded, or just really anxious a person? I have no idea which it is. Listen, though, I've gotten to the point where I'm good enough with PHP that, when I do break it, finally, I break it really good and solidly thorough. It's a thing. You think ignorant people can break things, hoowee, no, the real breaker-masters, are the PHP whiz-kids that take a thousand years to finally break something. It's like breakage karma sort of builds up like honey and it attracts THE BIGGEST MOST VICIOUS STINGING EVIL SUGAR ANTS KNOWN TO EARTHKIN. LIKE THE KIND OF VICIOUS STINGING EVIL SUGAR ANTS THAT MAKE YOU WONDER IF THEY'RE ACTUALLY ANTS AND PROBABLY HAVE HORNS.

Is earthkin not a word? It is now, screw off, spell-check.

So I did want to show this:

It's big, but this is the full character creation page. As mentioned last post, it's tabbed, and all of the image fields are in the images tab, instead of wherever, so they can be placed wherever. They do still sort by position, if I remember rightly, but this makes a little more sense, as far as interfacing logic goes. You'll notice that SMF 2.1's fancy new WYSIWYG editor loads both in all the text-areas in standard, as well as in the custom fields marked as textareas. This way, BBCode is a breeze for users, and on the list at some point, probably, is figuring out how to make it periodically save the character form. Because that'd be boss. Anyway, the WYSIWYG is one of the things that needs to change to be compatible with 2.0, because 2.0's WYSIWYG loads a different way. Being frank, I'd probably just take out the WYSIWYG triggers entirely. 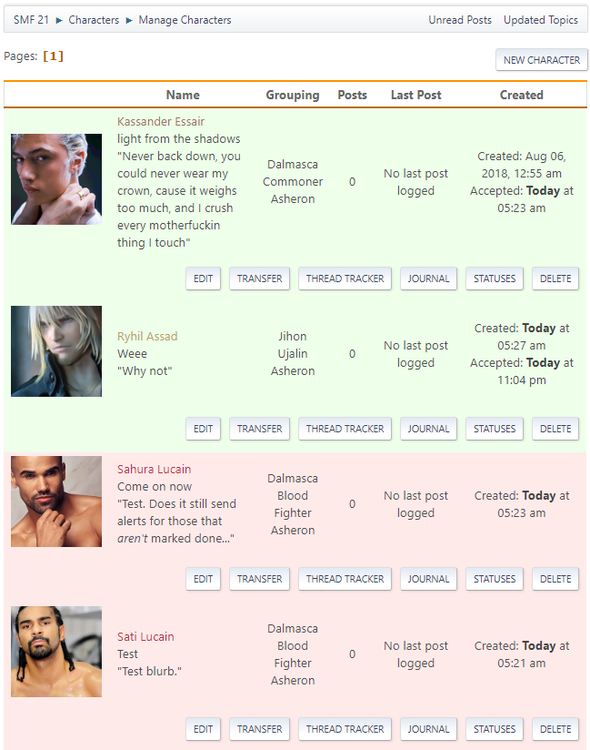 This here is the main character management page. Now with more cool! They're colour coded by default, but you can change this per theme. Approved characters are green, pending ones are pink, and characters that are in-progress are a pale steel blue. Character blurb parses for BBC by default, it's actually built into the back-end. 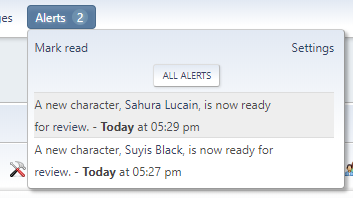 Yeeeees!! It sends alerts for pended characters to the staff team!!!!1111

These are also links, so it links to the character's profile, and also to the ACP approval queue. It sends to users in any member group that has the 'cmod_manage' permission; by default, though, users in root admin group #1 always get approval queue alerts. This is, of course, another thing that won't work on 2.0, and that's a damn crying shame. (Again, as in 1.0.0, new characters from anyone with 'cmod_app_bypass' permission skips the approval queue outright - since root admins always have all permissions, admin group #1 never has to wait for approval even if it's on). The entire system here for approval is actually rather quite bloody slick. If I do say so myself. (Am I allowed to say that? Is that gloating?)

So when characters are accepted or rejected, it'll send an alert to their player, that tells them char name was accepted/rejected, so they know when their character(s) can be played. Aaaahm. Beyond that, pretty standard stuff. Oh, this time, I remembered to put the stupid page indexes in, so if you have 200 characters, they won't all show on one page (it'd be 10 pages lol).

There's one other thing I have to share, that I just got done. This wasn't in 1.0.0, so this is super exciting. 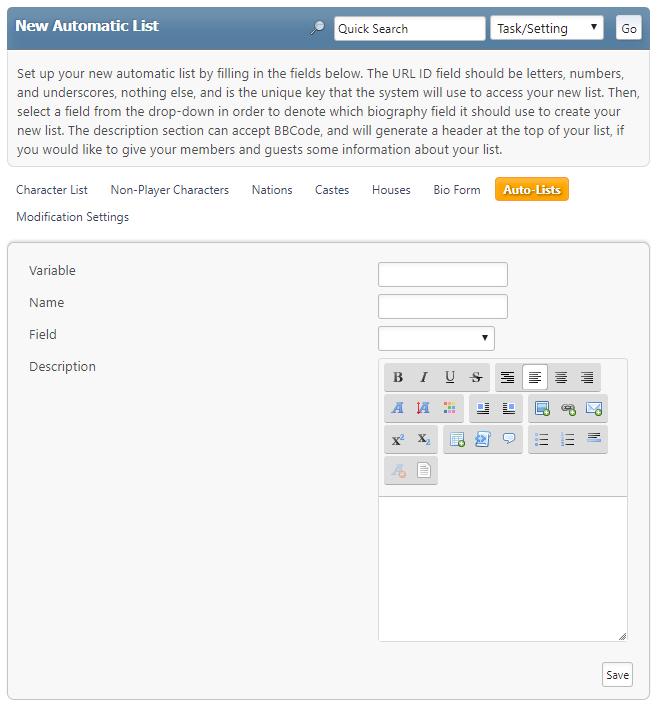 This is the new auto-list page in the ACP. Variable will strip out any wacky characters and leave just lowercase Latin letters, numbers, and underscores, because variable is the page URL that it uses for this auto-list. So we want it to be as clean as we can make it. If you try entering two of the same variable, by the way, it'll fatal_error on you. Haha. Then, name the page anything you like, select a bio field from the set of fields you created for your site to use as the auto-list base, type up a header description and... 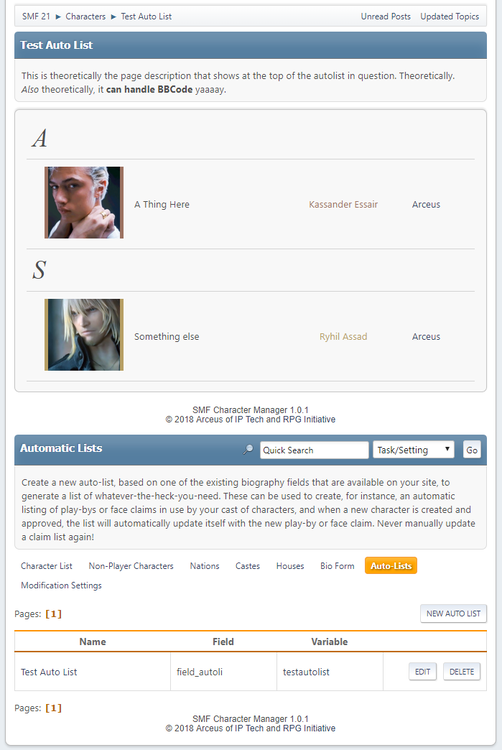 It generates and displays an automatic, alphabetised list, no coding required, right on the list page, of all the active characters' values for that field, and it looks nice, too. This is for automatic face claims and the like. If you want to do job listings, you can use it for that, grade listings, dorm numbers, HP-style wand stuff, anything you want to keep track of, set that shit and forget it, because it will automatically update the list when a new character is activated and has that field filled in. You never have to touch a list again, and neither do you need to know how to code to make one of these anymore! (Yep, you're welcome.)

This was a feature/function that I wanted in the Char Manager from day one, it just, I wanted the mod itself done and FAST so I could start using it at my own places, so tbh I kinda rushed through 1.0.0. I should theoretically be rushing through 1.0.1, but here we are. Lol So far, though, so good. Nothing's broken hopelessly yet (1.0.0 doesn't support PHP 7+, of course, so I'm building this version on PHP 7.1). There is also a giant welcome message when you first get into the ACP for the Char Manager, in 1.0.1, this will explain what everything is, what it does, what it's for, how to control it, etc, etc, and once you've seen it, it doesn't show again.

I think my next tackle will be the NPC controls. Which basically run off the general character controls, just with an extra field that marks it as an NPC. Cheehoo. Yanno, after I eat. (Have I mentioned I'm bad at food?)