So I just released ACM2 for 2.0 a while back. I actually didn't change much of anything, just adjusted some installation steps to account for:

and this means, pretty much the ACM2 on SMF 2.0 now is the exact same one as the one on 2.1. ... like down to the templates. Which means some of the templates are wonky as hell, because 2.1 does themes a lot better and is mobile-responsive out of the box.

I just installed ACM2 on my site and got it going.

If you were curious what kind of stuff you can do with ACM2 if you get brave enough: 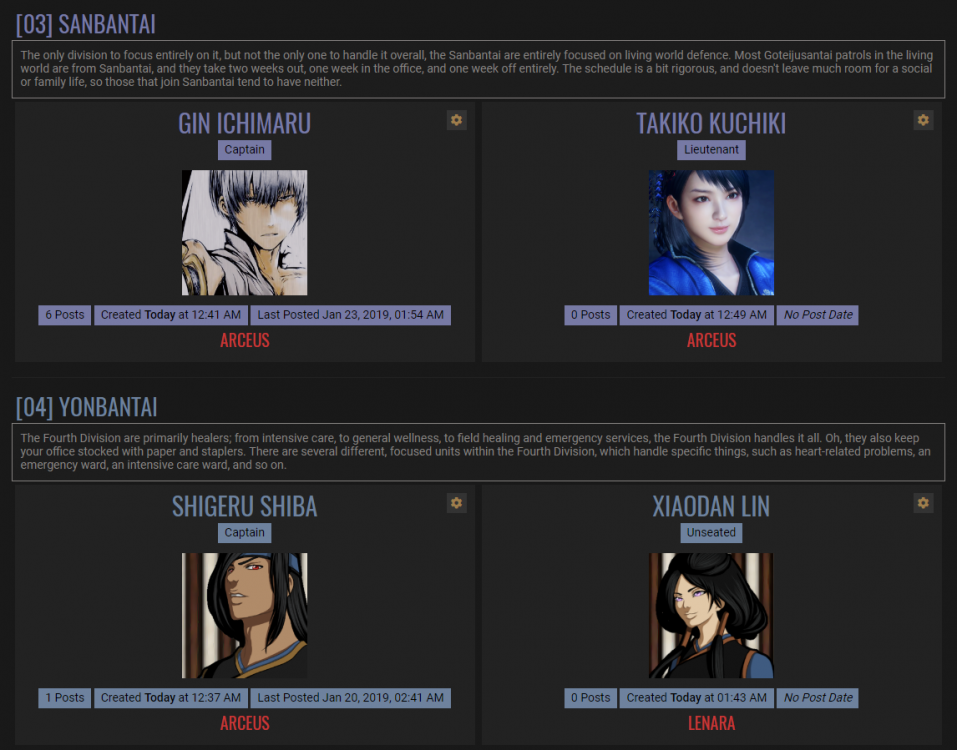 I started work on ACM3, too, my motivation's just basically nil, so I didn't get far (I think I hit the database structure and just kinda Died Inside). I will say that one level of bio-field will be taken out; if you want tabs back, you can arrange your profiles into tabs again pretty easily. Ahm, we'll also have built-in recent-posts tab for characters, I apparently also did not do the Smart Thing and make character names colour globally, so that will also be built into ACM3. My bad. I did it for threads and profiles and then Forgot for the rest I guess. (I am so forgetful and ADD you guys, like, half my "problem" as a coder is actually that I will autism-hyper-focus for months on friggin end and then finally get distracted by something... for another months on friggin end, and when I come back, I don't even know what the hell I've done. Lookit this what is this I coded this??? What? When? I literally don't remember doing it. Are you sure it was me???

I also am probably going to redo the damned URL structure; again. Because I can't... seem to figure out how to do it in a way that doesn't action=end;area=in;sa=crazy;sec=shit;id=like_this.

Why are SMF's URLs like this. Like I know PrettyURLs is a thing that friggin exists but this should be built into the damned thing. Listen, this isn't 2006.

(By the way, if you want your URLs like /board/topic/topic-title, PrettyURLs is a thing that exists. It basically uses the same rough logic as IPS, actually. Unfortunately its profile rewrite uses username, not display name, and I didn't tinker long enough to figure out how to make it switch to display name. I'm... fairly sure it can be done, I just have to figure out how.)

BUT, I think it'll be action=characters for the character list and the auto-lists, and then managecharacters for char and npc user controls, and then character;id=whatever for viewing a character's profile. So it'll be all spread out a bit but the end result is the URLs will be a bit shorter. I'm also trying to formulate a better name-arrangement set up (and ACM3 will have a few name order options that will use the middle name or middle initial), because I ran into this issue with my site. You see here in this screencap, all four of these characters has an east Asian name. Their name SHOULD be last first, not first last, because east Asians order it last first. Right? Okay but if I change the name ordering to last first, Cynemaer Eccleston, very focking European name, goes Eccleston Cynemaer. ... nah.

Anyway, yeah, after the crazy roller-coaster that was 2018, I decided I wanted to go home, and home for me has always been Bleach, so I run a site again, bit sooner than I intended, but whatever. Turns out Bleach-verse still causes plot-bunny explosion in my brain, and everything else I was doing kinda drowned in a flood of Bleach-muse. Meanwhile, nice to have this minor influx of SMF-stuff to do around here. I like seeing new SMF sites spring up. Also, I thought to myself helping someone, and I'm not gonna say who because they weren't a problem and I don't want to make them feel bad, lol, that it'd help if they were more specific about something. I was like, "I know they all seem to think I'm basically the SMF God for some reason, but I'M REALLY NOT," and then I figured it out anyway, so I guess I know why everyone seems to think I'm SMF God. I also fixed something in a giant wall of PHP whilst half-awake. Yanno, I never really know if I should be like, wow I'm cool, or wow I'm terrifying, or wow I need a life???

Yeah. I just wanted to show off some pretty stuff and ramble a bit about ACM3. My last blog post was kind of... well, you know. After stepping back, I do feel a bit better, but also worse, somehow. (And sorry to everyone that I may incidentally flake on, but I'm following the muse right now. I'll wander back eventually.) Maybe after a bit in Sacred Space AKA Bleach-land, I'll... be less mopey. I just kinda fell into the jaws of crippling depression and haven't really crawled back out again. Not that it's obvious. It did occur to me, part of my problem might be that I'm very good at hiding it when I'm not doing so hot. And when people do think I'm having a hard time, I'm just busy. So I guess it kinda leads to this weird misconception that I don't ever actually get upset. (I'm actually stupidly depressed right now, you just can't honestly tell if you're just watching my posts.) And then when I do finally hit my limit, it tends to explode out of me in a fit of impetuous anger that's actually more hurt than anything, it just expresses wrong because lol what is normal brain function and typical socialisation. Arc don't fuckin' know her.

In other news, winter finally came. Bbl gonna hibernate until it goes away. (Sorta kidding.)